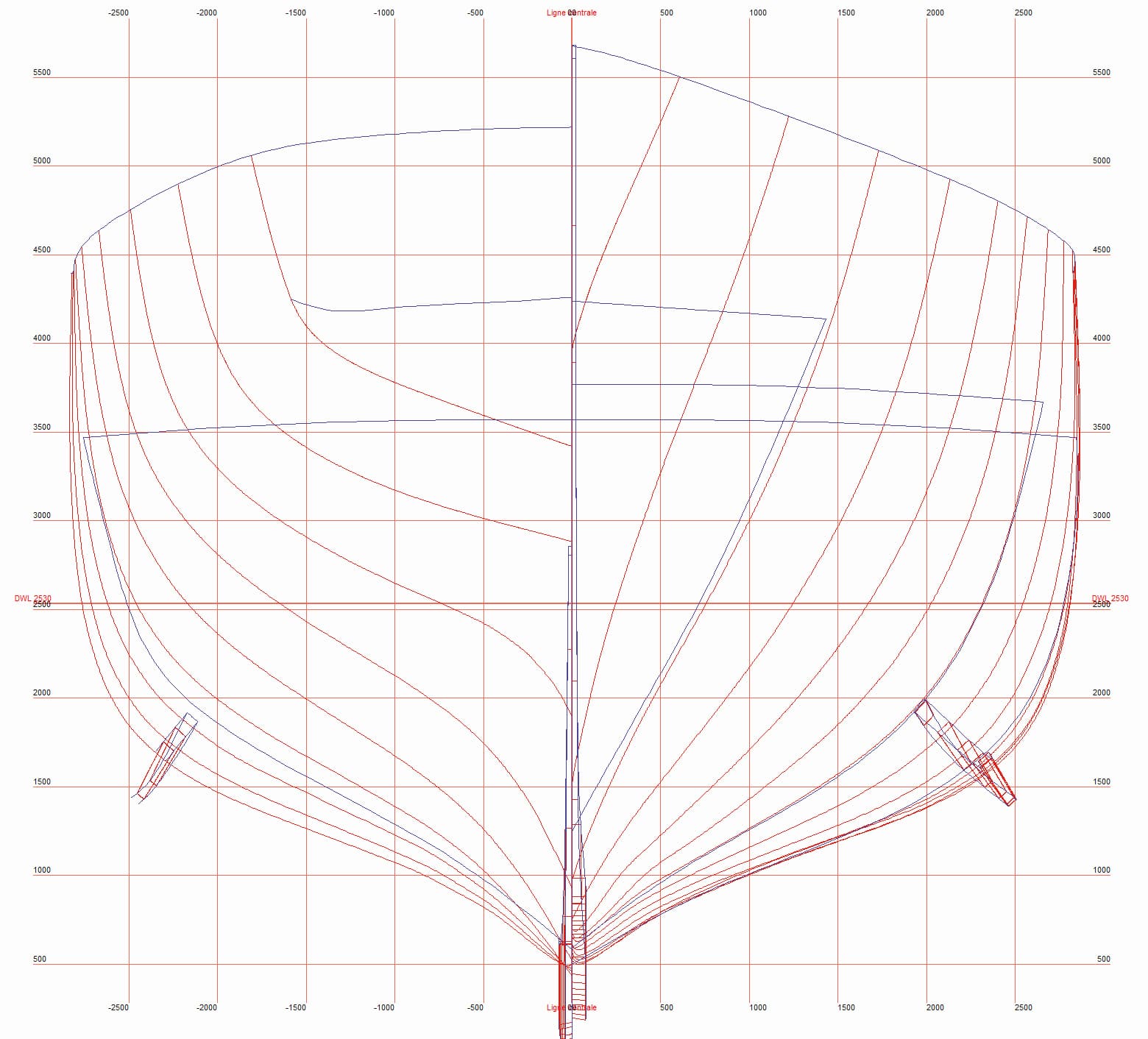 Plans have arrived.
The challenge has been met!
We didn’t have a 3D photo scan of the boat to be able to draw a virtual image on which to work in simulation and make the curve plans.
We only had a side and top plane in the 2009 stability booklet.
No face, no volume…

The impossible mission of taking the measurements IN the hull at the end of January and the beginning of February has paid off! See time line before.

So with Sirga, Manuel, Cretus, guided by Marie-Laure, under the supervision of Jérôme, from a distance, we got there!

We first went through a dented “origami”, on february…

Because Jérôme is also a maritime archaeologist, and the plans that do not exist, he knows something about them. Then they worked a lot with his son Amaury to produce the plans from these measurements and photos in the dry dock of 2018.

The magic team, we finally understand the common language – we had to take the waterline as reference absolute- and correct the impossible view we had (some X,Y, point of reference problem).

And there you go!

The new plate * (even the vocabulary) has changed since the removal of the structures. The bow has risen 35cm, about 25 tons torch cut last year. The engine, the bulkheads removed, as well as the pigs that stabilized the keel.

It is a lighter, finer boat from which one can imagine, maintaining the look of the sailboat which will sail under another name.
The vague plan, the only one we had in the stability booklet is far from reality. It must be said that just the thickness of the lines is equivalent to 10 cm of metal at the previous scale… An approximation that we cannot afford!

The technical details follow:
The new bridge must be raised by some 80cm, as well as the railing so that we can sail to the list without taking on too much water. Our architect will redo all the stability tests to find the new center of gravity and ensure the installation of new equipment (mast, sails, wheelhouse) and internal structures (watertight bulkheads, tanks, generators, etc.) so as to find CLASS A navigation: designed for long sea voyages (anywhere) during which the wind can EXCEED force 8 on the Beaufort scale (look at photo in librarie) and the waves can EXCEED a significant height of 4 meters.

The Michelle Louisa had this capability as a professional fishing trawler operating in the North Sea. It must be kept. But, no more feet in the water at the first wave!

Because fishermen prefer not to have to pull the nets too much over the rail for obvious reasons: efficiency for the hard work of fishing above all.

We need now to create the next important step with André Herkovitz from H&T our partner, that help us to invent the reality according to is expertise of transformation. The construction and engineering plans.
The freeboard was 40 cm at the main beam (see vocabulary), it will have to keep at least 80cm in order to heel in complete safety, without the water adding weight to each wave, which would make the boat more unstable.
“When wind or a wave rolls the vessel over, the center of buoyancy moves to one side and raises the vessel back upright. If the vessel rolls too far, the center of buoyancy can’t move over any more and the vessel becomes too top heavy and capsizes. This tendency to capsize happens much sooner if the center of gravity is moved higher.” (See reference Australia Buonancy in Library prints)

To follow : flow simulations thanks to the ad hoc software from Jérôme Delaunay.