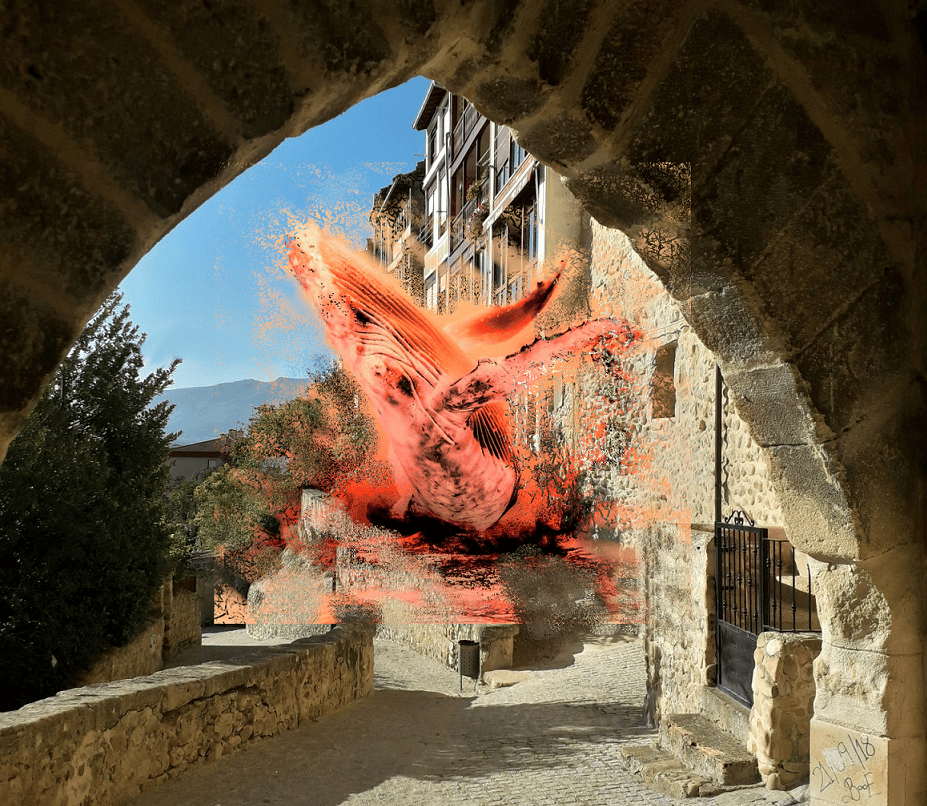 Commited to SDG 14 from the UN Sail for ethics is proud to organize this action to raise awareness of underwater life and the ocean. Endorsed by the United Nations Ocean Decade 2021/2030, at the international level. So proud, to be part of this revolution for peace and for the global oceanic humankind !

The Global Action Network Platform for

“A global community of ocean-minded professionals committed to co-designing and co-delivering a revolution.”

Behind its air of a mountain village, Medina de Pomar, small city of 5000 people, inland. It is only 80km from Bilbao, and the Atlantic Ocean, the Gulf of Vizcaya, in northern Spain, and 80 km from Burgos, provincial capital. Its power comes from the land, mostly, but the ocean frontier is near. It used to be a powerful regional capital, of the Middle Ages, that has lost its strength with modern times. Its agriculture and its territories protected by powerful lords, are today off the main roads of the world.

Tourism here is local, this preserves its ancient beauty of the 11th century. At the beginning of tourism time, it was health resort. At the end of XIX century its pure air attracted the urbanites from Bilbao, one of the most polluted city at the time, with black facades due to activities based on metallurgy, iron and steel, in the Basque coast.

But time changed, and in 2013, the Pfizer Foundation awarded Bilbao with the prize for “the healthiest Spanish city”, proving that political will can do great things.

Medina, in “Las Merindades”, sheltered by the Cantabrian Mountains, at an altitude of 600. Its local Siberian-type climate (yes, yes) has become more pronounced lately. The drought drank the rivers a month early. The beauty of its natural heritage, waterfalls, canyon, and architecture make it a privileged place.

It has deep ties with the sea, and Latin America, despite its relative isolation. The Nela river that licks his feet is a tributary of the Ebro, the longest river in Spain. Its sources, born very close, this summer, have starved airs that we do not know them. It runs, towards the South and plunges into the Mediterranean at 800 km. We start talking about climate change.
Here was born the navigator Juan de Salazar y Espinosa in 1508 who left for South America, and named Asuncion in Paraguay, where he died in 1560. Ernesto Che Guevara’s grandfather was born in Calle Mayor.

A bit of cosmopolitanism to blow the air of limitless horizons

Friday 12 of August 2022, La Casa de Cultura will host virtually an international meeting on the theme of the ocean: “An ocean of possibilities” between crises and hopes, how to act.

To speak of hope, despite the crisis, positive things are happening elsewhere, for the ocean, whose winds we do not feel here, but in memory of its routes towards the distance.

The routes of water are without limit or border, because it makes up 80% of our planet and our body.

A meeting between continents, in SYNCHRONIC (a recent word means virtually through the Internet) with Argentina, France, Mexico, Portugal, Palestin via INTERNET (google meet). If you want to register, contact Marie-Laure Drouet – mail contact on the first page.

We will see the negativ – venoms- & positive – antidotes- aspects of the various observers concerning the current situation of water and the oceans.
Between crises and hopes: they have decided to act, to be a witness, and each is committed in their own way.
They are part of the current possibilities and solutions. This is what will be shared here, against despair, in order to motivate people to act on a daily basis, because there are many of us.

Marie-Laure defend the idea that

urgency must push us to creativity, not to withdrawal.

Fear is not a good counselor,

yet it is real advice of something going bad or dangerous. But faith is a good impulse, or hope, love of life, call it as you want. Faith in Life, human beings, despite their errors and faults, awareness of nature and its strength, because it has carried us for millions of years.

The Ocean who gives us life.

We have the great pleasure of allowing a wide variety of speakers to present their action, their commitment, their work, concerning the waters and the ocean in particular.

Hanan Abu Hajjaj (Palestine), a representative of the municipality Al Qarara, struggling with pollution in the mediterrean Coast, fighting for the cleanliness of the water, and the well-being of the inhabitants in severe conditions.

Monsyerra Batista (Brazil) ecotourism guide, working with people about the connections with water in nature.

Other exceptional people or organisations will be visible or heard.

The Break Free From Plastic a movement of organisations/members. “The global movement envisioning a future free from plastic pollution” for their action and their great resources worldwide, with 12589 individuals and 2656 Organizations.

C.I.E.L. Center For International Environmental Law is a powerfull lobbyist for Legislation and make great advances for regulations and policies.

Ficosterra Spain in the same province of Burgos- Spain, as Medina “transform seaweed into fertilizers and biostimulants that promote the maximum development of crops“.